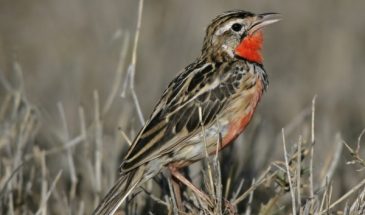 The endemic birds of the Usambara Mountains and the diversity of the world-renowned safarilands. This is an Anytime trip for two or more people at a time of your choosing.

This trip takes in the best of the northern endemic species, with locally-based experts. Exploring a range of habitats, the species list is extensive.

The lark plains north of Arusha hold the endemic Beesley's Lark, as well as Athi Short-toed and Short-tailed. If time allows, we can also explore around Mt. Meru, home to  a range of montane to wetland species. Specialities can include Abbott's Starling, Moustached Tinkerbird, White-eared and Brown-breasted Barbets, Red-fronted Parrot and Forest Batis.

We next head for Tarangire and Manyara reserves, and the world-renowned Ngorongoro Crater. There are several species endemic to this area, including Tanzanian Red-billed Hornbill, Fischer’s and Yellow-collared Lovebirds, Ashy Starling and Rufous-tailed Weaver. Crested Barbet could be found with luck, and more likely are Orange-bellied Parrot, Three-banded Courser and Magpie Shrike. At night, we may find both Freckled and Slender-tailed Nightjars. Mammals are plentiful and include good populations of Black Rhino, Lion and Elephant.

The West Usambaras, although degraded, feature Usambara Weaver, Usambara Thrush, Usambara and Sharpe’s Akalats, Eastern Mountain and Shelley's Greenbuls and Usambara Eagle Owl which are all endemic or near-endemic. Species such as Yellow-streaked and Stripe-faced Greenbuls, Striped Pipit and Yellow-throated Woodland Warbler are much more easily seen here than in Kenya.

The lower forests of the East Usambaras are better protected, and highlights possible here include Amani & Banded Green Sunbirds, Long-billed and Red-capped Forest Warblers, White-chested Alethe, Swynnerton’s Robin, Usambara Hyliota and Fuelleborn’s Boubou. There is some species overlap with the coastal forests of Kenya, and Sokoke Scops Owl and Sokoke Pipit have both been recorded.

The South Pare area is relatively unexplored, but has the endemic South Pare White-eye. Taveta Golden Weaver is a speciality of the arid region under the mountains.

The trip can be extended with the Serengeti, or the offshore island of Pemba, with its 4 endemic species. 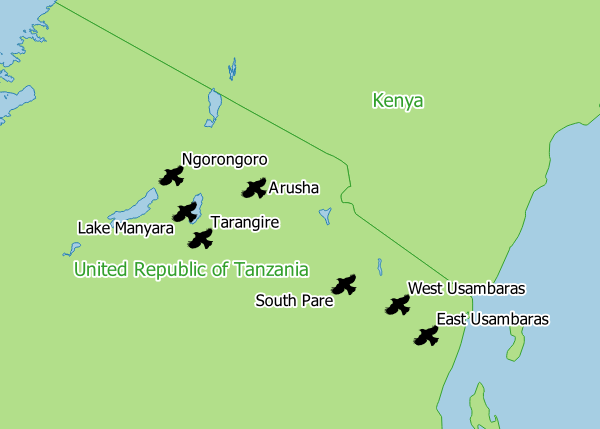