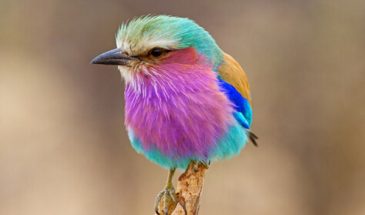 Abundant and spectacular birding among the big mammals of the Rift Valley. This is an Anytime trip for two or more people at a time of your choosing.

Birds Galore!.....Kenya’s birdlife is both profuse and easy-to-find. Only in East Africa can such a large number of species be seen in such a short time, with many of them colourful and spectacular. This tour regularly brings 300-400 species.

The tour begins in Nairobi National Park, where we begin looking for Masai Ostrich, widowbirds, bustards, larks and other grassland species. The park is also great for mammals, including the endangered Black Rhino. Drier areas on the descent from Nairobi into the Great Rift Valley are often filled with birdlife that is markedly different from the higher areas.

Next, the Rift Valley Lakes of Baringo and Nakuru are excellent for waterbirds and acacia species. Lesser Flamingos are there in their millions, with Great White and Pink-backed Pelicans and a variety of shorebirds.

Next, it is time to explore the central highlands, where sunbirds abound, and the grasslands are filled with spectacular widowbirds and the skies are full of raptors.

The Samburu reserve complex is excellent for mammals, including African Elephant, Lion, Cheetah and Leopard, as well as a variety of dry bush species including Somali Ostrich, Vulturine Guineafowl, Somali and White-throated Bee-eaters and Golden-breasted Starling.

We have some final birding on the slopes of Mt. Kenya, and we can seek out the the endemic Sharpe's Longclaw and Hinde's Babbler.

Popular extensions to this trip include Kakamega Forest, which has many restricted-range forest species, and the famous Masai Mara, which is excellent for both mammals and birds. 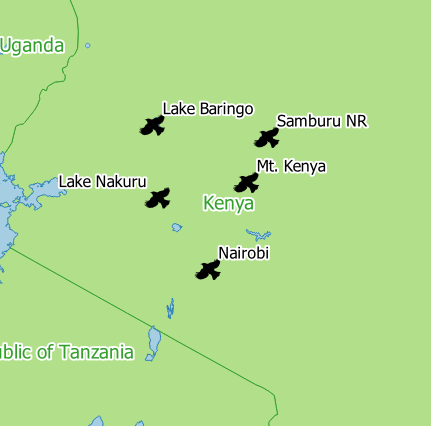